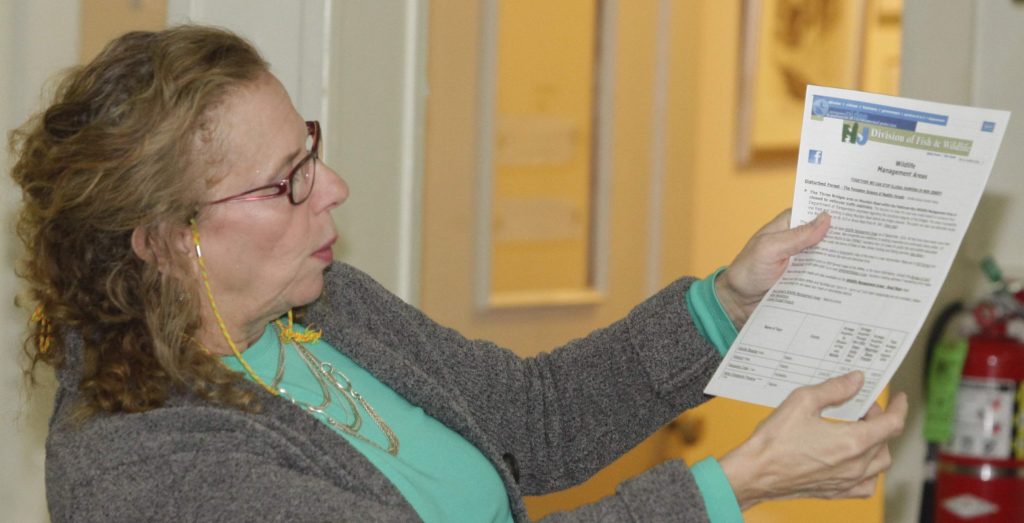 Photo by Jake West/New Jersey Herald – Susan Williams speaks during a meeting of the Skylands Chapter of the New Jersey Sierra Club to discuss the Sparta Mountain Wildlife Management Area on Tuesday at the Unitarian Fellowship in Newton.

NEWTON — The Sierra Club is beginning a drive to raise funds to pay for a legal challenge to the state’s proposed forest stewardship plan for the Sparta Mountain Wildlife Management Area.

The announcement came Tuesday during a meeting of the Skylands Group of the New Jersey Sierra Club.

“I will be sending out letters,” group chair Susan Williams said, “and we will be going to national to seek their permission to use Sierra Club in the letters.”

The meeting was called to discuss the New Jersey unit’s fight to stop what the group calls a “logging plan,” for the 3,400-acre wildlife management area, which is in parts of Sparta, Hardyston, Jefferson and Ogdensburg.

The plan, announced at the end of December and created under contract with the state by the New Jersey Audubon Society, has not yet been formally adopted by the state Department of Environmental Protection.

State officials are still reviewing public comments made during the winter and early spring, and making some changes to the 87-page plan.

This new plan is an extension of a 4-year-old forestry plan that seeks to adopt a “young forest” or “successional forest” concept, which promotes a wider diversity of tree species and ages.

The idea is that the varying types of forest created over decades would mimic natural forces and establish a wider variety of habitat for birds and animals.

To create the varying habitat, the plan envisions treating varying size plots by cutting most of the trees, some of the trees or only selected trees in the plots over the next decade. A succeeding plan would carry on the work, adapting to what has occurred in the preceding years.

Williams said at Tuesday’s meeting the plan is aimed at the golden-wing warbler, an endangered species, but with climate change and interbreeding with the blue-winged warbler, the species, which migrates, no longer uses the mountain as a breeding ground.

Among other concerns raised by the Sierra Club are that the area is part of the Highlands, the headwaters for rivers and reservoirs that provide drinking water for several million people in eastern and middle New Jersey; the plan is a ruse that would allow commercial logging operations; and there is little control over probable environmental damage caused by those logging operations.

About a dozen people attended the meeting. The discussion also focused on the Audubon Society’s role in the plan and the possibility the state, if it is allowed to put the plan into effect on Sparta Mountain, will move to do the same thing on other pieces of state-owned property.

Much of the state-owned land, whether in wildlife areas, state parts or forests, was purchased through use of voter-approved Green Acres bonds and, as such, Williams noted, “are a public trust, held in our names.”

“The Sierra Club,” she said, “sees this as a statewide issue. This is going to happen in all areas.”

The DEP, when it finishes the plan, will hold a final public meeting before the plan becomes effective.

Last week, a spokesman for the DEP said no final decision has been made on the plan and did not know if any work would be done this coming winter.

Because of breeding seasons for birds and fish and endangered species being present in the forest during the summer, work in the forestry plan would be limited to the period from mid-November to early April.